It may seem to some that Pembrokeshire is a quiet, serene county with most of the drama happening between the jagged, gorse-dripping cliffs and boisterous blasting of the Irish sea.  But as the recent ‘Pembrokeshire Murders’ drama demonstrated, documenting real-life events of a serial killer stalking these very shores (and, thankfully, due to the diligent work of our fine Dyfed Powys Police, being caught and our coastline made safe again), it’s not always quiet cottage life around here.

In fact, there’s more to our stunning sunsets than meet the eye, and over the years, there have been some mysterious sightings out to sea and even right here in our beautiful blue flag beachside village of Broad Haven.

44 years ago, in the summer of 1977, a group of school children were playing in the yard of Broad Haven Primary School when they saw something strange hovering above a field near the school; a narrow, cigar-shaped vessel with a globe capsule in the middle, seemingly piloted by a humanoid figure in a silver suit.  The vessel hung in the air for several long seconds as the children stared with fascination at this unfamiliar sight before it vanished in a flash.  Eager to recount this peculiar tale, the children rushed inside to tell their teachers, who, unsurprisingly, thought that the children had concocted this fantastical tale.

Each child was called in separately to the headmaster’s office to tell their version of events.  The headmaster was determined to find flaws in this fairytale, but, one by one, each child’s account, as well as their strikingly similar drawings of the vessel, were exactly the same.

On hearing of this mass sighting, in a year when the Ministry of Defense had received several reports of strange flying objects around West Wales, the media declared it Wales’ most prominent extraterrestrial sighting: the Broad Haven UFO.  The same description of a flying vessel had been given by members of the public and schoolchildren around the area on the same day, supporting the children’s story of the Broad Haven UFO and prompting the media to name this area of Wales the Dyfed Triangle. 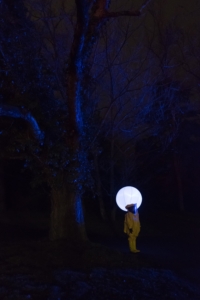 Broad Haven UFO mania ensued – the owner of the now-defunct Haven Fort Hotel, situated directly behind Atlantic View looking toward Little Haven, claimed that the flying object had come so close to her that her face had begun to burn at the swirling energy it was giving off.  A prominent local businessman, believing the whole story to be a farce, began appearing around Broad Haven dressed in a silver suit as a prank.  The village began piquing the interest of UFO hunters nationwide, with one fascinated author writing a novel based on the school children’s accounts.

The Government, of course, denied extraterrestrial activity.  It was likely, they said, that it was a training maneuver from nearby RAF Brawdy that had been witnessed by the children, although, behind the scenes,  they ordered military police to fully investigate the incident.
In recent years, a retired US Navy sailor came forward to explain that the silver suits were standard fireproof uniforms for the US military and that, around the time of the sightings, the US military were flight testing the brand new, UK-made Harrier jets of which the sea harrier versions released that year would be used to fight in the Falklands war 5 years later.

Nothing conclusive was ever reported back to the public about these sightings, and, 44 years on, the Broad Haven UFO is still a mystery.  So, if you’re here in Broad Haven on your holidays staring into the sea-horizon sunsets or taking advantage of being in a Designated Dark Sky area, with binoculars at the ready to view some of the stunningly clear constellations from your patio, then you might just be lucky enough to spot one of Pembrokeshire’s most talked about unsolved mysteries – the Broad Haven UFO.

This message is only visible to admins.
Problem displaying Facebook posts. Backup cache in use.
Error: Error validating access token: The session has been invalidated because the user changed their password or Facebook has changed the session for security reasons.
Type: OAuthException

Our luxurious cottages have been decorated and furnished with relaxation in mind. Using only the finest quality furnishings and emphasising the 360 views around the cottage we guarantee that you will unwind and relax.

Our photo gallery is overflowing with photos, why not take a look? ... See MoreSee Less

Our Kittiwake cottage is always a crowd pleaser, from the breathtaking coastal view to the location itself.

Sleeping upto 7 and dining up to 11 people Kittiwake is great for those family get togethers. ... See MoreSee Less

From embarking on the renovation journey in 2014, to winning awards in 2021! What an adventure it has been so far.

“It’s no surprise that Atlantic View was the 2021 winner of the UK Enterprise Awards, scooping the much sought-after prize for the best self-catered holiday cottages in Pembrokeshire.”

To read the full article head to our website!

From the rugged coastline, to art galleries, boutique shops to delis, Pembrokeshire has so Much to offer. With a vast amount of beautiful sights to see and places to explore it’s impossible to cram it all into a short break.

We have limited full week availability left for April 2022, so you’ll have to be quick!

To take a look at each cottage’s availability please follow the link. ... See MoreSee Less

Number one on our top 5 reasons to holiday here at Atlantic View; The Pembrokeshire Coast Path.

It’s 186 miles of some of the world’s best walking paths and attracts millions of visitors to its cairns and bridges, cliffs and bridleways. Located on the most westerly coast of Wales, within the only coastal national park in the UK, it’s known for shipwrecks, puffins, iron age forts, seals, Strumble head lighthouse, porpoise and an array of bright coastal flowers.

To find out our other 4 top reasons to holiday with Atlantic View just follow the link! ... See MoreSee Less

Broad Haven Lifeboat Station: keeping us safe on the sea

Preparing for your post-lockdown Pembrokeshire holiday
Scroll to top