Here in Pembrokeshire, the only coastal National Park in the UK, we welcome millions of water-loving tourists to our infamous shores every year.  With glorious clifftop cottages, stunning sandy beaches, islands full of rare wildlife on each horizon, and the Irish sea pushing substantial waves towards crowds of eager surfers, you can see why this is such a popular spot for those who love watersports.  Whether you’re bringing your dog to explore some of the 186 miles of coastal path that stretches the length of the county or the kids just want to take the bucket, spade, and some sandwiches and explore the rock pools at your favourite sandy cove, the sea is the biggest draw for our guests at Atlantic View. 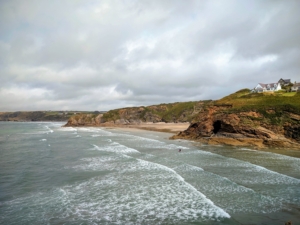 But if you’ve been following BBC2’s popular program ‘Saving Lives at Sea’, you’ll know that time spent on the coast means being at the mercy of Mother Nature.  Thankfully, The Royal National Lifeboat Institute has many thousands of lifeboat stations dotted across the UK’s cliffsides, including at Little Haven.

Covering the twin beaches of Little Haven and Broad Haven, this vital lifeboat station started life in a small, sheltered building near the waterway in 1882, just 52 years after Sir William Hillary founded the RNLI in 1824.   Despite a bigger lifeboat station being built in 1903, and a slipway installed on the beach nearby, it was hard to find crew members in such small communities, and the station closed in 1921.

But as watersports grew more popular and tourism began becoming an economic institution in Pembrokeshire, the lifeboat station at Little Haven was reopened in 1967 and named the Little and Broad Haven Lifeboat Station.  It was in this year that the inshore D Class Lifeboat, still a model used by the existing RNLI station, was introduced to Little Haven.  Don’t worry, it’s not a 50+-year-old boat – the Jack & Edith May, a new D Class d-766 lifeboat was installed at Little and Broad Haven lifeboat station in 2014. 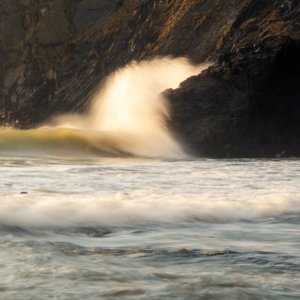 Here in Pembrokeshire, we feel extremely lucky to have the RNLI close by so that we can keep our guests safe and allow us all to enjoy the majesty of the sea.  But our vulnerability to the power of the water and nature itself should not be taken lightly. Our local lifeboat station crew have been presented with four awards for gallantry in recent years, and we should repay those who volunteer to brave dangerous situations to save our lives by showing respect to them and the sea.  As the largest maritime charity in the UK, it is still incredulous that this invaluable service still runs solely on charitable donations.  As well as rescuing on average 23 people per year, the RNLI also provides flood rescue services as well as training and providing equipment to our shoreline’s lifeguards.

We urge visitors to Atlantic View to participate in the plethora of watersports available right on the doorstep, including our very own invention, coasteering.  But we ask that you do so carefully, responsibly, and respectfully.

Here are a few links that can help you to stay safe on the water:

This message is only visible to admins.
Problem displaying Facebook posts. Backup cache in use.
Error: Error validating access token: The session has been invalidated because the user changed their password or Facebook has changed the session for security reasons.
Type: OAuthException

Our luxurious cottages have been decorated and furnished with relaxation in mind. Using only the finest quality furnishings and emphasising the 360 views around the cottage we guarantee that you will unwind and relax.

Our photo gallery is overflowing with photos, why not take a look? ... See MoreSee Less

Our Kittiwake cottage is always a crowd pleaser, from the breathtaking coastal view to the location itself.

Sleeping upto 7 and dining up to 11 people Kittiwake is great for those family get togethers. ... See MoreSee Less

From embarking on the renovation journey in 2014, to winning awards in 2021! What an adventure it has been so far.

“It’s no surprise that Atlantic View was the 2021 winner of the UK Enterprise Awards, scooping the much sought-after prize for the best self-catered holiday cottages in Pembrokeshire.”

To read the full article head to our website!

From the rugged coastline, to art galleries, boutique shops to delis, Pembrokeshire has so Much to offer. With a vast amount of beautiful sights to see and places to explore it’s impossible to cram it all into a short break.

We have limited full week availability left for April 2022, so you’ll have to be quick!

To take a look at each cottage’s availability please follow the link. ... See MoreSee Less

Number one on our top 5 reasons to holiday here at Atlantic View; The Pembrokeshire Coast Path.

It’s 186 miles of some of the world’s best walking paths and attracts millions of visitors to its cairns and bridges, cliffs and bridleways. Located on the most westerly coast of Wales, within the only coastal national park in the UK, it’s known for shipwrecks, puffins, iron age forts, seals, Strumble head lighthouse, porpoise and an array of bright coastal flowers.

To find out our other 4 top reasons to holiday with Atlantic View just follow the link! ... See MoreSee Less